Out of Commission for Awhile

Update: Well, transferred all the files I could access from the damaged drive to a new drive, plus went to my old backup and transferred stuff from it as well.

Also, just to be sure, I went ahead and re-installed a lot of the items I purchased from Daz3D (they make it easy with their auto-installer), and manually reinstalled a lot of stuff from Renderosity (the other site I get most of my stuff from, and mainly stuff for the Genesis 3 and Genesis 8 figures I use).

Tested it a couple of times by loading some old save files, and they seem to work.

I won't know for sure until much later, but I think I'm okay to start rendering again, just need to figure out what to start with 😄

Well, it looks like I may not be able to make new images for a week or two

The primary external drive I use for my Daz Studio renders has started acting up (not loading certain items). I'm trying to transfer all the content to a new drive, but its not recognizing certain folders.

Its my own fault, really. I bought a relatively cheap 2TB external drive awhile back, and I guess it wasn't meant for the heavy usage I have been putting it through.

I did learn my lesson from the last time this happened, though, and a couple of years ago made a backup of my Runtimes.

Problem is, that was a couple of years ago, so if I default to using said backups, I'll have to go through the time consuming process of re-installing, and that could take a week or so.

The thing I hate most about this is that all of the new 'scenes' I had set up since that backup (all of the characters and the situations I put them in) will be lost if I can't recover anything from that drive (like my rendition of Meg Griffin, among others), so it will be back to the drawing board and remake them from 'scratch' 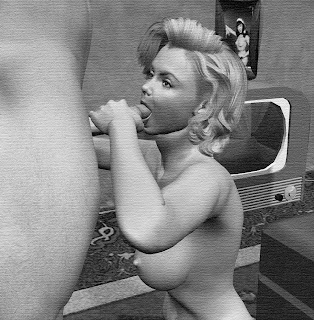 A single frame of the alleged Marilyn Monroe Sex Tape has been released, and your ever zealous reporter Chup@Cabra has been the first to acquire it! ^_^ For those who don't know, an alleged tape featuring Marilyn Monroe having sex has been sold: http://www.msnbc.msn.com/id/24112286/ Thing is, I do believe such a tape exists, but I don't believe anyone other than the FBI has it. Hoover was a real bastard willing to break any laws to monitor those he considered 'threats' at the time. Anyone who was willing to sell such would sell it for far more than a measly 1 million, and any Marilyn obsessed fan with deep pockets would pay far more to keep it from getting out. Also, as I have just proved, anyone with the appropriate technology could fake such (think what someone with actual artistic skill and a top knotch system could do). 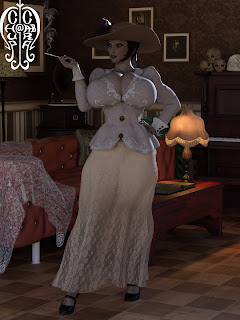 The trailer for the next Resident Evil game dropped recently, called "Resident Evil: Village":   In it, we see a rather voluptuous character, that may or may not be a vampire, whose name (thanks to google), is Lady Dimitrescu. In the short time this trailer has been out (only a few days as of this post), an amazing amount of Rule 34 of this character has appeared, with one of my favorites being made by someone by the name of Almighty Patty: Lady Dimitrescu by Almighty Patty Well, on looking at her......dimensions.....I had to try my own version of her as well. I guess you could call this a 'Take One', although I don't think I'll try another version of her. I just happened to have a floppy had, skin texture, and dress to emulate her look (although I actually used two dresses, so my version is showing off some butt cleavage as well ). 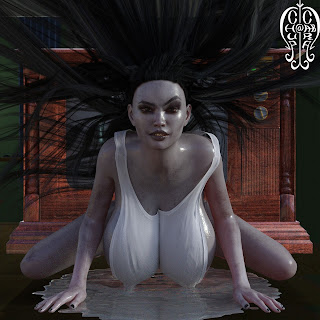 The Ring, Samara Morgan BE

My somewhat B.E. take on Samara, from the film series "The Ring": Samara Morgan Wiki I've never seen any of the movies, but I've seen a lot of fan art of this character around.  This being 'The Season' and all, I decided to try my own version, particularly because I picked up a character pack that was pretty much meant to be her (or at least, her adult asian counterpart ). On a side note that has little to do with this character: With the breast size I gave my version, and the 'asian' face morph, she kind of reminds me of the Japanese AV Actress (read 'porn' ) Hitomi Tanaka.  She has a set of breasts nearly as large as what I rendered here (I won't provide a link, just google her yourself to see ^_^). For some boring notes: I once again used Daz Studio for this image, mainly to use the 'wet skin' application I have for this model (Genesis 3 Female).  Because it had to be rendered in "IRay", I rendered th